"Who wants to see an auntie kiss?" jokes the actress, who also tells 8days.sg about how her husband feels about her getting intimate with Pierre onscreen.

Those who watched the first season of When Duty Calls would know that Mei Guang has a teenage son (played by Richie Koh), who was born out of wedlock. [Ed: Richie is MIA in the new season.]

While the original series focused on the strong, independent Mei Guang being a single mum, all while getting courted by Pierre's Tan Kim Po, the sequel sees her married to Kim Po and embarking on a quest to conceive.

When 8days.sg met Kym at the drama’s press conference, she happily showed us a peek at the “action” between her and Pierre.

“Do you have this picture? Someone sent me this and I got a shock, it’s so funny,” said Kym, before whipping out her phone to show us this screen grab: 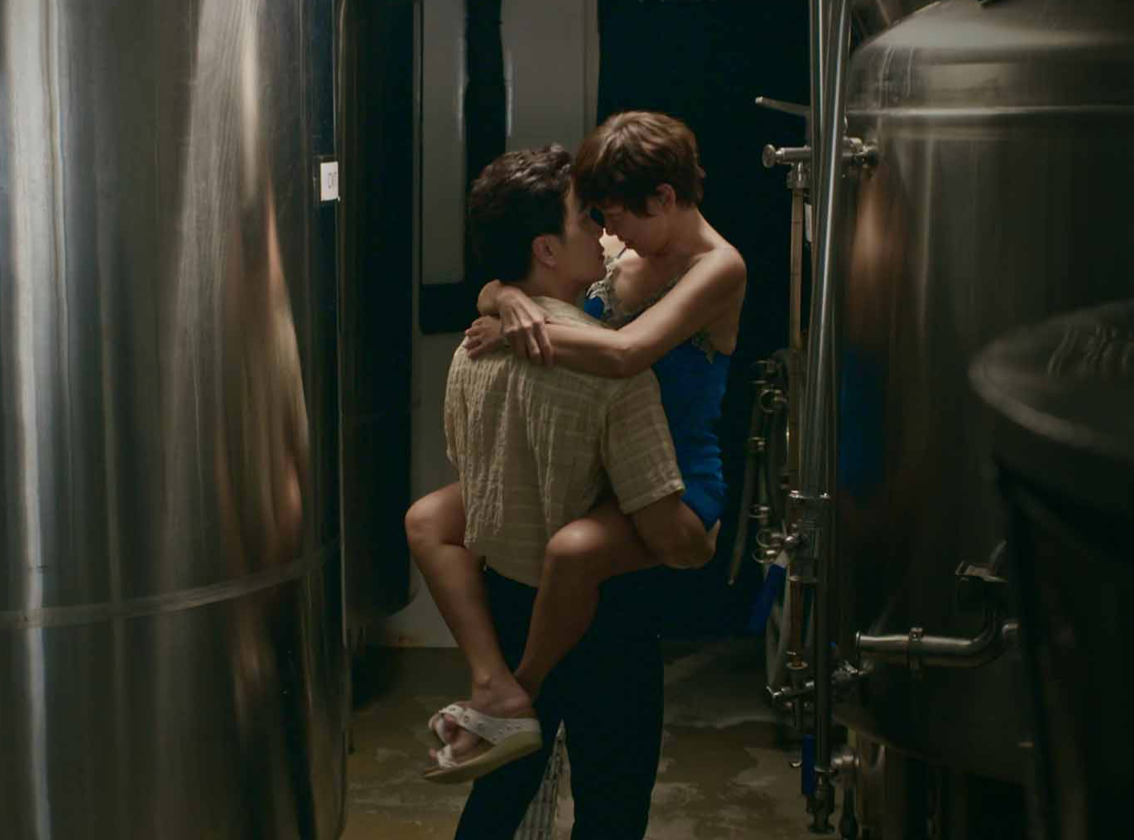 “It’s really quite fierce hor,” laughed the actress, before adding: "I’m the kind who talks very loudly but actually I cannot [fully let myself go for such scenes] (laughs)."

8DAYS.SG: How was getting so intimate with Pierre onscreen like?

KYM NG: Pierre is really sweet. Even though he usually likes to 'disturb' people, when we were filming those scenes he would spare a thought for me in case I felt awkward, and would be extra careful.

So I’m very thankful for him. I’m the type who’s all talk, but I don’t actually dare to do it. (Laughs). I always say “Come come!” but then in the end this one cannot, that one cannot (chuckles).

Actually there were quite a few kissing scenes that I rejected 'cos I always say, 'Who wants to watch an auntie kiss?' People want to watch young and pretty girls (laughs). But there was one scene where [Pierre] just gave me a small peck on the lips.

Did your husband get jealous of Pierre?

No lah, he knows I won’t really 'enjoy' it ‘cos I prefer mature men. I always say that [the younger guys are] handsome but I like to admire older men. (Laughs)

But when I told my husband that there were kissing scenes, he said “No, now got Covid you cannot stick out your tongue”. (Chuckles) Then when I got home and told him I’m done with the kissing scene, he told me “Okay, the Listerine is ready, please go and help yourself”. (Laughs) My husband is very cute lah.

Were you worried that audiences would not take to your lovey-dovey scenes with Pierre?

When I first got the script I wasn't very comfortable with it, but they told me not to take it so seriously 'cos the scenes are meant to be fun [and not sexual].

Have you heard any feedback about your pairing with Pierre?

In the first season the relationship was already established, but at that time he was courting me so people just kept saying “Please reject!” This time it’s very different. This time it’s two old people being affectionate, it’s very gross lor (laughs).

My friends told me they found the scenes quite funny, and they felt that I was very brave for taking on this role. But some of them did tell me that some newspapers had people commenting that it was very disgusting, but no choice leh. (Sighs)

As an actress, when I saw the script I already felt like “No lah…” Can you imagine how people will feel when they actually see us doing it (laughs).

Do you have anything to say to these people?

Yah, I want to say sorry (laughs). I’m sorry for frightening you but I hope you can continue to watch it ‘cos this show is not about us being in the bedroom.

It’s only in the first five episodes 'cos my character is desperate to have a kid. After that you won’t see me in bed anymore so please give me some time (laughs).

Do you think that people are more harsh with women of a certain age when it comes to intimate scenes?

In a way, I guess. For me, I would also feel the same way like “Aiyoh, please lah, [you’re] so old why would you still want to do these scenes? (laughs). If another one of my colleagues does these scenes I’d ask the same thing too. (Chuckles)

Is there any young actor you would want to work with some day?

Tyler Ten. (Beams) I think he’s about 1.9m, he’s very tall. It’s not that I like tall guys but I’ve never met one this tall (laughs) And he does Muay Thai too. He’s been on my show before, he’s really friendly and so fresh. (chuckles)

I don’t know if there will ever be a chance, but don’t ask me to play his mother ah (glares). [I want to play] His neighbour, the girl next door (laughs). I can be the friendly neighbour auntie who stalks him. (Laughs) No choice, I only have the fate of playing aunties.

Your character goes through a lot trying to conceive a kid. Have you considered having kids yourself?

Before I got married, I wanted to have four kids 'cos I’m very close to my siblings and it’s more fun when you have a lot of children. I have four brothers and I’m the one and only princess. But after I started working, I realised that life is quite tough so I changed my mind and don’t want to have children anymore.

Even though I think my husband would make such a good father, it’s so tiring and there's so much responsibility and pressure, I just want to look after myself (laughs).

How about your husband, did he want kids?

He did but I didn’t so he doesn’t have a choice. (laughs)

In the show, your mother-in-law really wants to have grandchildren. Does your husband’s family mind that you guys don’t have kids?

Oh, no because my husband’s family has nine sons and they all have children. So nobody pressures us. We just enjoy our couple life with lots of freedom (chuckles).

Do you get envious when you see your friends with kids though?

I’m not envious… They’re so tired… I do like kids but I feel that life would be very different when you have kids. It’s very stressful and there’s so much you have to sacrifice.

My sister-in-law would always tell me “You’ll sacrifice a lot but you gain a lot too”, so it just depends on what you want [in life]. It’s a choice and there’s no right or wrong.

But maybe I’m just not suitable 'cos I don’t think I can take the stress. For example, when my niece or nephew gets a girlfriend or boyfriend, I will start worrying about them getting cheated. Or when they go overseas to study, I’ll worry about them living alone abroad.

They’re only my niece and nephew and I’m already so worried, can you imagine if it’s my son or daughter?!

And if I have kids, my attitude at work would be very different 'cos it means I would need to work to feed my family. Unlike now, I don’t have kids so I just have to feed myself and I’m not stressed at all. You see the difference?

So you already made up your mind about not having kids before you got married?

When I was working, I thought about having to work to raise my children. I felt that finding a job was already so tough, how am I going to feed my kids? I really don’t know how my parents did it.

Last time I thought, “I just want a job that pays me $1000 so I can share my husband’s financial burdens then he wouldn’t have to work so hard”, and I want to have four kids. But it’s not like that, it’s not so simple (sighs).

But it’s not that scary also lah. Many people have kids and are still happy with what they’re doing too.

Catch the first episode of When Duty Calls 2 on meWATCH below:

Mediacorp Hunk Tyler Ten Is “Honoured” To Be Known As A Thirst Trap; But Says He Would Never Go Up To A Girl On The Streets To Ask For Her Number